You're viewing Michelin Energy Saver in 195/55 R16 87H. Make sure that these fit your vehicle before ordering. Click here to search

The Michelin ENERGY SAVER can be summed up in just a few words: reduced fuel consumption and shorter braking distances. This tyre is designed for everyday use in family cars, city cars and minivans. As well as safety and reliable drivability in any conditions, these tyres also offer reduced fuel consumption. This is due to the use of a special rubber compound, noted for its durability and lightness. This means that the tyre weighs less than other models of the same class, thus significantly reducing fuel consumption.

The Michelin ENERGY SAVER also has a long lifetime since the tyre is durable and wears evenly. This not only ensures that it lasts longer, but also guarantees a safer journey by providing an optimal performance throughout the tyre's lifetime. Using innovative solutions, the tyre's developers managed to reduce braking distances on wet surfaces by up to 3 metres compared with the previous generation of tyres. This is a significant difference, especially for drivers paying particular attention to safety when choosing a tyre. The Michelin ENERGY SAVER is one of the new generation of Michelin tyres that use silica instead of soot (previously used as one of the components of building tyres). The tyre therefore meets the highest ecological standards and is environmentally friendly both during its production and when in use.

Michelin is the largest tyre producer in Europe. The brand currently specialises in the production of top-class tyres and found fame as the producer of Formula 1 tyres. Apart from its own brand, the group is also a majority shareholder in companies such as: Riken, Taurus, Siamtyre, Tigar, Euromaster, Warrior, Kormoran, Recamic, Kleber and BFGoodrich. The headquarters of the French company, founded in 1889, are in Clermont-Ferrand, the city where the brothers André and Édouard Michelin founded the company over 120 years ago. 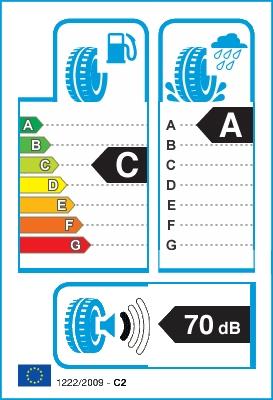 Not the right size? View all Energy Saver tyres