You're viewing Michelin CrossClimate in 225/60 R17 103V. Make sure that these fit your vehicle before ordering. Click here to search

Michelin CrossClimate is the world’s first summer tyre approved for use in winter. It bears the three-peak mountain snowflake (3PMSF) mark. It may also be used where it is compulsory to drive on winter tyres. If you travel on summer or winter tyres all year round, this model is also perfect for you.

The tyre is only produced in Europe, in two Spanish and two German factories.

The development process lasted as long as 3 years. The tyre was tested in 7 European countries at temperatures ranging from -30°C to 40°C. Before the model was marketed, it was tested on as many as 5 million kilometres, undertook 1,000 lab tests and the final touches were taken care of by as many as 150 people. The tyre may also be freely used in the countries where winter tyres are compulsory.

This model is a much more technologically advanced design than other all-season tyres. It is no surprise that in the tyre labelling system Michelin CrossClimate has obtained the highest A rating in terms of performance on wet surfaces. Both according to the criteria used for summer and winter tyres. The tyre has also received the highest grade concerning noise.

The highest labelling class was achieved thanks to, among other things, its advanced tread. The directional tread pattern is the best protection against aquaplaning (skidding on wet surfaces). The manufacturer has also fitted the tread with 3D sipes. Their arrangement resembles the structure of summer tyres, but the geometry is similar to that used on winter tyres. With all that, the width of the sipes changes depending on the conditions. Thanks to this, the tyre bites into the pavement, taking care of traction and appropriate stability on bends regardless of the conditions (also on slippery surfaces).

Apart from the 3D sipes, the tyre is provided with blocks having bevelled edges. They ensure a large tyre/surface contact area, meaning a short braking distance on different types of surface. Michelin CrossClimate is made from a flexible rubber compound. This is another element which improves the tyre’s behaviour on wet, dry and snowy roads. The silica used in the model reduces the heat emission in the tyre. 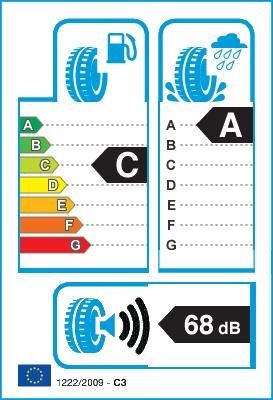 Not the right size? View all CrossClimate tyres