You're viewing Goodyear EfficientGrip Performance in 205/55 R16 91H. Make sure that these fit your vehicle before ordering. Click here to search

The tyre has achieved the highest "A" rating for grip on wet roads. The Goodyear Efficientgrip Performance meets the expectations of even the most demanding drivers. As you would expect from a summer tyre, the model performs exceptionally well in variable weather conditions. Thanks to its asymmetric tread pattern, the Goodyear Efficientgrip Performance ensures good water dispersal and excellent grip, even on very wet roads.

Compared with other tyres, the Goodyear Efficientgrip Performance guarantees 2 metre (8%) shorter braking distances on wet roads and 3% shorter braking distances on dry roads. The model uses WearControl technology to ensure a balance between grip and low rolling resistance. This extends the tyre's lifetime, which means that the driver can enjoy its excellent performance specifications for its entire service life. The tyre's attributes also include short braking distances, which means that drivers of cars fitted with Goodyear Efficientgrip Performance tyres can feel really safe.

Its Fuel Saving technology helps limit energy losses, reducing this by around 18% compared with other premium tyres. External noise is another area where the Goodyear Efficientgrip Performance outshines the competition. Thanks to its unique tread design and the use of a special compound in its production, the engineers behind this model have managed to significantly reduce tyre noise. The model is ideal for drivers looking for a tyre that provides not only safety and driver comfort, but also optimal performance across a range of surfaces in variable, often difficult weather conditions.

Goodyear is one of the largest tyre manufacturers in the world. In terms of sales, it is the second largest in Europe and the fourth largest worldwide. As well as tyres for passenger cars, the company also produces aircraft tyres, tyres for industrial machinery, rubber hoses and soles for shoes. Goodyear owns brands including: Dębica, Dunlop, Fulda and Sava. The company has its headquarters in Akron, Ohio, USA. The group's factories currently employ around 90,000 people. 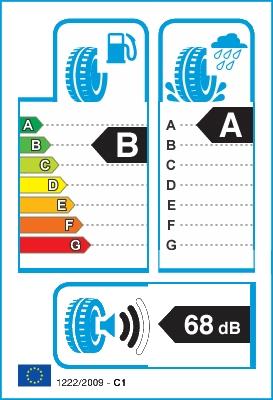 Not the right size? View all EfficientGrip Performance tyres